EROSS (European Robotic Orbital Support Services) objective is to demonstrate the European solutions for the Servicers and the Serviced LEO/GEO satellites, enabling a large range of efficient and safe orbital support services. The project will assess and demonstrate the capability of the on-orbit servicing spacecraft (servicer) to perform rendezvous, capturing, grasping, berthing and manipulating of a collaborative client satellite provisioned for servicing operations including refuelling and payload transfer/replacement.

EROSS embeds key European Technologies by leveraging on actuators, sensors, software frameworks and algorithms developed in previous European Projects. EROSS boosts the maturity of these key building blocks and increases their functionalities and performance in a coherent work programme targeting fast and practical deployment of the developed solutions in space. The consortium went into great details in the EROSS concept and the technical operational plan to manage perfectly the risks and complexity of development of such a large system.

Following EROSS, TAS plans to commercialize its Multi-Purpose Servicer the LEO&GEO servicing business, pulling with him the project’s technology providers. Besides, most partners will address other short-term space/non-space markets, such as Space Exploration & Science and factory automation (sensors, robots).

The project success relies on a highly skilled and experienced consortium involving all the leaders of previous SRC Operational Grants. EROSS involves 11 partners from 8 countries over 24 months and a budget of 3,9M€. As Operational Grant n°7, EROSS will be part of the Strategic Research Cluster (SRC) on Space Robotics.

The autonomous assembly of large structures in space is a key challenge in future missions that will necessitate structures too large to be self-deployed as a single piece. The James Webb Space Telescope has reached this limit and the next generation telescope expected by astronomers, like the High Definition Space Telescope, will therefore require new assembly technologies, in particular autonomous robots. The need for large structures in space goes beyond telescopes and concerns also solar arrays for power plants, light sails to reach outermost regions of the solar system or heat shields to land on Mars.

The PULSAR overall concept aims to build upon this heritage of missions and create a fully autonomous, on-orbit robotic assembly system. Its demonstration use-case is the high precision assembly, using a robotic arm, of a set of mirror tiles in order to build the very large primary mirror of a next-generation space telescope. In this case, the robotic assembly system is a key enabling factor for the mission, as the sheer size of the mirror would not have allowed for a traditional stow and deploy launch configuration.

The Horizon 2020 EU-funded MOSAR will aim at developing a ground demonstrator for on-orbit modular and reconfigurable satellites. The project targets to integrate and demonstrate technologies required to enable a fundamental shift of paradigm in designing and deploying satellites in future space missions. That will include:

As part of the EU Strategic Research Cluster in Space Robotics, MOSAR will build on and consolidate technological results of previous projects of PERASPERA and its operational grants (https://www.h2020-peraspera.eu/).

The challenge of ADE/OG10 is to demonstrate on a planetary analogue environment the system needed to realize with high reliability a planetary very long traverse capabilities (kilometers per sol) with a rover while: autonomously take decisions required to progress in nominal conditions and/or in presence of conflicting goals; guarantee consistent data detection while avoiding un-detection of interesting data along mission path; handling rover on-board resources both in nominal or under contingencies events; allow fast reaction while reduce mission risks and seize opportunities of data collection in a MSR scenario 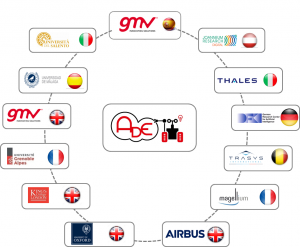 Short description of the project

PRO-ACT, aims to realize an implementation and demonstration of multi-robot collaborative planning and manipulation capabilities in a lunar construction context, relying on, extending and integrating the outcomes of PERASPERA ooperational grants (OGs). Towards this objective, the PRO-ACT project purposes to demonstrate a novel approach of deploying multiple robots, Robot Working Agents (RWA), towards achieving common goals by cooperative goal decomposition, collaborative mission planning and manipulation for transport and assembly of supporting infrastructure. The focus is on (1) enabling assembly of an ISRU plant on the moon as precursor to human settlement and (2) partial assembly of a mobile gantry (3) Re-use and integration of existing software and hardware robotics building blocks to realize functional RWAs.